The iconic luxury six-star sail-shaped hotel, symbol of Dubai, hosts an exhibition for the first time in 22 years, with unseen works by the artist Anish Kapoor. No longer a wonderful unfathomable fortress, now the most exclusive super-luxury hotel in the world increases the offer for its guests and at the same time opens up to dialogue with the public, involving above all contemporary art lovers. The works of Anish Kapoor, British-Indian sculptor and conceptual artist, on view at the Dubai solo show are in perfect harmony with the Burj Al Arab’s architecture, entering into an intimate relationship with the exterior and interior. Kapoor’s sculptural works, with their abstract biomorphic forms, establish an intimate synergy with visitors changing according to different points of view. A unique visual and sensory experience. 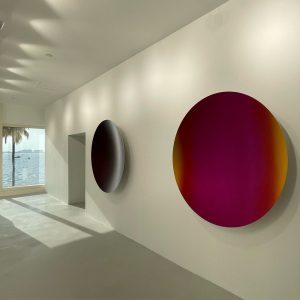 Shiny, mirroring surfaces; rich colours; pure shapes that seem to defy gravity, depth, and the very limits of perception; plays of transparencies that come into harmony with the surrounding nature, reacting to light, sky, to the expanse of the Arabian Gulf sea on which opens the large window of the temporary exhibition space entrusted to Galleria Continua. 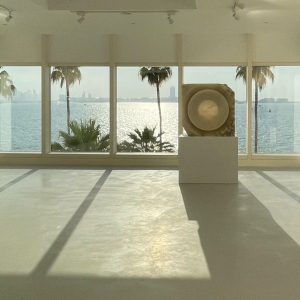 The idea of the pop-up gallery is a gradual way to get closer to Dubai “It’s a new adventure. We want to arrive on tiptoe. The place is magical, we are in a building that is an icon of Dubai -tells me Lorenzo Fiaschi, Director and Co-founder of Galleria Continua- The idea is to stay, but we do not give certainties, because we also want to feel good in a context that is important and in which so many differences coexist “. Galleria Continua does not yet have its own permanent exhibition space in Dubai but has been participating in the two main artistic events in the United Arab Emirates for 15 years: Art Dubai and Abu Dhabi Art. Let’s find out more about the works on view at the Burj Al Arab Jumeirah hotel and about new turning point given to the hotel that has redefined the concept of extra-luxury hospitality in the world. 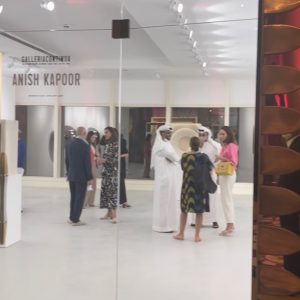 A window on Dubai’s world

“The gallery is located in an incredibly strategic place. They gave real importance to art and culture. Everyone passes by here -Lorenzo Fiaschi explains to me- We have also created a window on Dubai’s world in the background. We see the sea, the palm trees, the skyscrapers, the light. We are also lucky because we are facing the right way, we have the sunset in the gallery and the effect of the sunset on Anish Kapoor’s seven works on display, conceived by him, positioned by him, are total poetry”.

The glass wall on which the works stand out overlooks the palm trees, the sea, the skyline on the horizon, looking itself like a work of art. Anish Kapoor‘s solo exhibition at the Burj Al Arab shows unseen works in which the artist carries out research on light, space and matter. The carved alabaster is striking and it acquires unexpected lightness thanks to its transparencies, intensified by the Middle Eastern sun and its iridescent reflections, changing as the hours pass. “Disc 2010” and “Untitled 2020” are sculptures whose imaginative power is increased by the surroundings, making us perceive how much they draw life from the presence of the observer and the surrounding landscape. 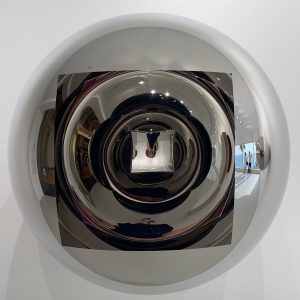 “There are mirrored steel artworks with spherical shapes that create a very powerful morphosis. There are stones, alabasters, an organic matter with a beautiful transparency, that are in synergy with light, sun and incredible sea -emphasises Lorenzo Fiaschi- And then there are artworks where the pigment is the main actor. They are discs that are originally mirroring, but Anish Kapoor uses pigments adding them in layers, one subtle glaze after the other. Therefore while the observer moves the colours change, darkening and lightening, bringing us into a very surreal atmosphere, very deeply moving”. Polished mirrored stainless-steel sculptures, convex and concave surfaces. An upside-down game of images that confuses, although everything straightens at the focal points. Kapoor seems fascinated by concave mirrors that make the world appear upside down, a bit like Lewis Carroll in his “Alice in Wonderland”. In fact, the three works exhibited at the Burj Al Arab Jumeirah hotel take their title from Carroll’s novel: “Alice – Triangle”, “Alice – Oval”, “Alice – Square” all from 2017. Equally poetry and mutability possess “Spanish Gold to Magenta satin” and “Red satin and Black Mist” both from 2019. Two steel discs covered by multiple thin layers of color, one of which was sold just a few hours after the exhibition opened for the vips preview. They are all artworks that establish a close dialogue with the viewer, coming to life thanks to this entirely interior dialogue. 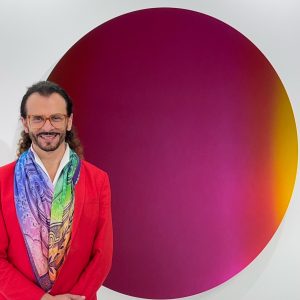 “Kapoor’s artworks are always very horizontal, very universal and speak to everyone, and to all cultures –Lorenzo Fiaschi highlights- We are in a very suspended world, but also made of light, intimacy, reflection, so it manages to dialogue with all different sensibilities, with all cultures in a very powerful way”. Anish Kapoor’s art can reach everyone because the artist’s origins are an incredible mix of different cultures, from Punjabi to Jewish-Iraqi and Anglo-Saxon. “It is a very relational work because the observer, his movement and his gaze become part of the game, becoming a bit the eighth color of the rainbow -Fiaschi tells me- You can’t explain it in words. We can only make you want to visit the exhibition and at the same time experience the architecture of the Burj Al Arab”. The space created and designed by Galleria Continua is essential, minimalist, clean, clear, and knows perfectly how to create a pleasant contrast in which the artworks emerge and are amplified by entering into a relationship with the interior of the hotel and the exterior landscape, enjoying art, sea, architecture. 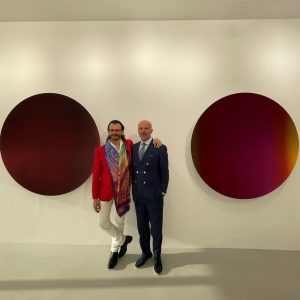 An Italian but global flair

I ask Ermanno Zanini, Regional Vice President and General Manager of Burj Al Arab, why he started this collaboration with Galleria Continua and why he decided to host an artist like Anish Kapoor for the first art exhibition in Burj Al Arab Jumeirah’s exhistence: “The thread that led us to bring an art presence to the Burj Al Arab is because the hotel itself is a piece of art. The choice fell on Galleria Continua because it is an Italian art gallery but very internationalised representing extraordinary international artists”. 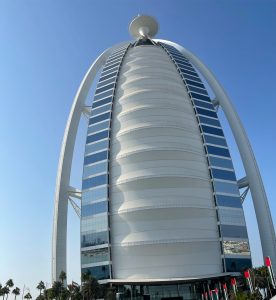 The Galleria Continua has offices in Italy, China, France, Cuba, and Brazil, and makes difference and multiculturalism a strong point, representing artists of various nationalities. “Anish Kapoor was Lorenzo’s choice that I liked from the start -Ermanno Zanini tells me- Because his art is very sculptural and I think it is perfectly in line with the mood of this hotel, that is a sculpture itself”.

The exhibition was open to the public on November 21, 2021 and will run until January 30, 2022. It can be visited by appointment only. 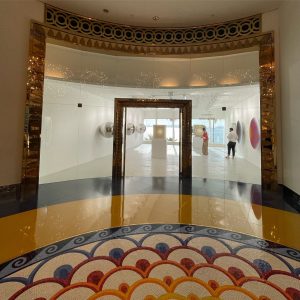