Intensive Care Units is artist Sandro Kopp’s exhibit in Vienna. Emotions, self perception, Zoom video calls, in the “selfie society”. A journey into contemporaneity, through faces, gazes, moments, places, that is both introspection and a play of reflections. On the background, the changes that the pandemic brought to our lives. At the Sammlung Friedrichshof Stradtraum, German-New Zealand painter Sandro Kopp, exhibits three works that articulate in different ways the concept of authentic dialogue with subjective reality. In a world dominated by photography, where images are the result of lenses and are the product of a digital eye, and technology becomes so pervasive, the subjective vision should be recovered. To do this, there is no other way than the artistic gesture. 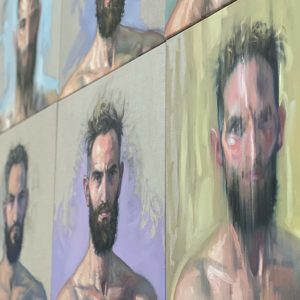 “Tiredness, bad lighting, being hungover, and emotions definitely, everything fits into a far more layered and rounded experience of reality” Sandro Kopp tells me, and this is what we can see in his artworks on show in Vienna. 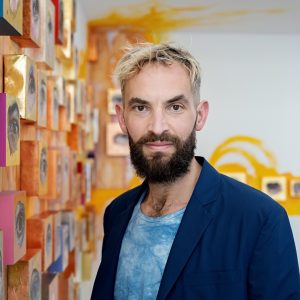 “Photography has become so ubiquitous in our existence, I myself realise that it has become almost an extension of my brain, of my neuronal network – Sandro explains to me – Psychologically we are relying on a mediated lens-based image more and more as a kind of representation of not even reality but of our perception. We think that a camera picture is our perception, but it is not”. Let’s go and see the three body of works on show in this exhibition at the Sammlung Friedrichshof Stadtraum, which can be visited till the end of July. 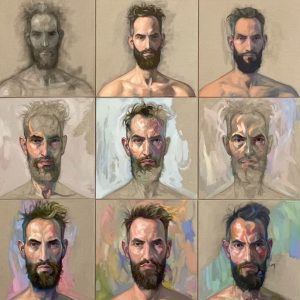 The New Me III is an artwork created in November 2020, which however was not influenced by the pandemic at all, Sandro Kopp tells me. The New Me III, is a series of 28 self-portraits made over a lunar month, the first set started in 2008, the second in 2013. Every morning the artist stands in front of the mirror and paints. It’s a kind of scientific experiment to measure both himself and his feelings on that very moment, and record the daily changes in him and in the things surrounding him. “I’m trying to have a very immediate perception of what I’m looking at and of what I’m experiencing – Sandro says – Then of course I have a dialogue with the material, because it is impossible to directly translate your vision, your visual process “. 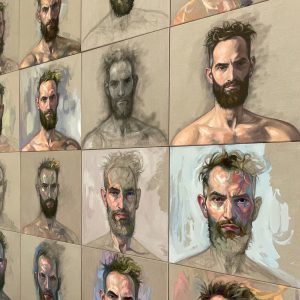 You have to deal with the fact that you broke your pencil, or with the wrong color, as Sandro explains to me, and reproducing onto the canvas or onto the page is a sort of tiring struggle. “I try to create the same boundary conditions every time and then do the same thing over and over and come out with a different result.” A movement of the eyebrows can distract and capture the artist’s attention, or he can focus on the color of the iris. Sandro Kopp is in constant dialogue with material and tries to chase and capture what the material has to tell him while, at the same time, trying to impose his subjective observation. “I love taking photographs, but now more than ever I am convinced that figurative art, whether realistic or not, can be the salvation of humanity. Computers create a moment in which everything is mediated, figurative art offers space for an authentic dialogue with subjective reality” Sandro Kopp tells me. 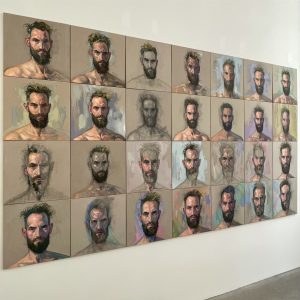 Eye Portraits is an artwork consisting of nearly 100 eyes placed by the artist on one of the walls of the Friedrichshof Stadtraum. 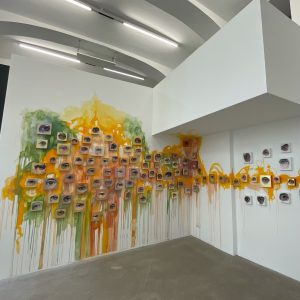 A mural of rare visual power where colors, applied with an artistic gesture that recalls action painting, form an abstract background against which the eyes of family members, friends, ordinary people and celebrities stand out, in all their carnality and their expressive power. Among these also those of Scottish actress Tilda Swinton, Sandro Kopp’s partner, who just recently took part in the presentation of Wes Anderson’s film “The French Dispatch” at the Cannes Film Festival. 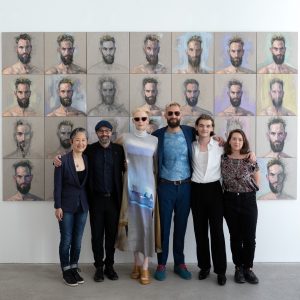 In the film, with an exceptional cast, appear also some large abstract paintings made by Sandro Kopp. A prelude to the next exhibitions that -as the artist assures me- will contain abstract works. And abstract art is already making its appearance in Eye Portraits. 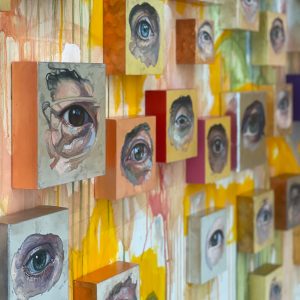 The eyes, that appear to be dissected, are embedded in the color with an expressionist materiality and engage in a very strong relationship with visitors. “I always really love when a painting looks back at you, entering into a dialogue with the viewer – Sandro tells me – Bronzino‘s portraits, for example, they are not passively being observed, they give you back penetrating glances, they look at you in turn, they are reaching out to you”. 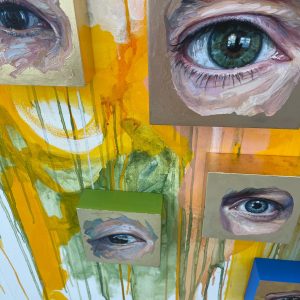 Eyes window to the soul, in a game of references, between metaphysical and physical, realism and introspection, and reflections, because in those irises the environment is mirrored, but also the same people portrayed. “I love the series of eyes – Sandro tells me enthusiastically – I see friends, family, acquaintances, who are in different parts of the world, from Berlin to Bangladesh. For me they are like space-time doors that take me back to that moment and to my relationships with the people portrayed”.

The Lockdown Zoom Portraits is a series of drawings created during Zoom video calls in the midst of the pandemic. Unconventionally exhibited frameless, they are the result of a brilliant intuition of the artist who, already fascinated by Skype in 2008, understood the importance of the new way of communicating through voice and video, starting to create portraits of people the artist was videoconferencing with. 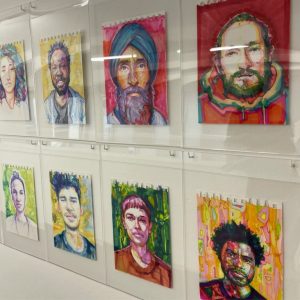 “It was total science fiction at the beginning and I found it interesting combining this classic and old-fashioned idea of ​​oil portraiture with this new technology – points out Sandro – I was interested in the idea of ​​this authentic subjective perception being represented through figurative painting”. With Covid-19 breaking into our lives and the need to shelter in place, everyone has experienced a sense of uncertainty. And it is back then that Sandro Kopp understood that making oil portraits, that were going to last over time was in total dissonance while everything around, from certainties to everyday life, was overwhelmed by a widespread sense of precariousness, insecurity, transience. 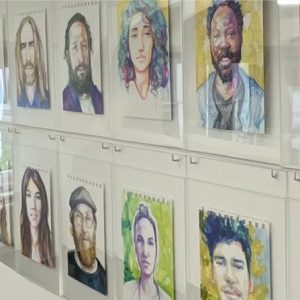 “So I got carried away by events and I decided to use markers whose color dissolve, not destined to last for centuries – Sandro tells me – This sense of impermanence felt appropriate to the moment we are living in. I didn’t really made them to be shown at all, but when I realised that showing them could also accelerate their deterioration, I found it incredibly fascinating and I was thrilled to include them in the exhibition”. The fading colors somehow symbolise the fading away of the bad times we all went through during the pandemic. 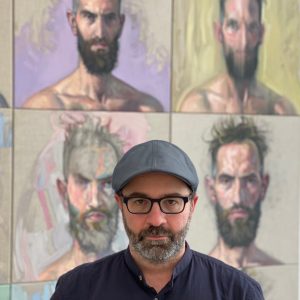 “They are exhibited a little fluttering, also to show the futility, a fleeting moment that the artist himself wants to convey using colors that tend to dissolve. Images destined to fade away over time. Even if they vanish, something will remain – Marcello Farabegoli, curator of the Friedrichshof Collection tells me – Technology and craftsmanship are back to be one. Today they are separated, but here there is a harmony between technology and the artist’s manual ability. A way also to put an end to the conflict with technology. From a conceptual point of view, this is an artwork full of meaning “. Intensive Care Units draws origin from an idea of ​​the director Hubert Klocker, and will be on show throughout the month of July at the Sammlung Friedrichshof Stradtraum. 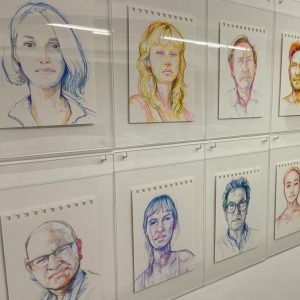